The third day was a rollercoaster. It was expected to be a very long day, with the morning round starting at 8:30am and the afternoon round possibly finishing after 7pm. We all got up early to have some breakfast together.

Most kids took their time, only Marcus finished early as he managed to checkmate his opponent in less than 25 moves. Still, finishing the game early meant he had to do some extra exercises in his Step book to stay sharp!

When Gabriel came out a bit later, he was seemingly upset. We expected that he lost because he made a blunder, but it was nothing like that. His opponent had pulled out every single trick to get him off his game. Little did he know that it’s a bad idea to poke a Spiderman. Despite his anger, Gabriel managed to keep his calm behind the board and finish off his opponent.

Unfortunately, Boris didn’t have a similar story. Boris had been outplaying his opponent from the start. First he won a pawn and later also a piece. Having such a big advantage, Boris started relaxing a bit. He thought he could take another pawn so he could promote his a-pawn. The only thing not in the equation was his opponent’s plan. She managed to get two rooks on the second rank and soon his king was in all sorts of danger. Boris realized that there was no way out and that he had to accept the draw, but in the process he chose the wrong square for his king and suddenly he got checkmated. A painful loss but a valuable lesson.

More positive was James’ game. In the exchange variation of the Rui Lopez, he simply outplayed his opponent. A piece sacrifice was gladly accepted by James and after parrying all the threats he was just material up. An easy win.

Last to finish was Gerent. After the opening Gerent went a bit astray. The lack of cooperation between his pieces quickly led to a lot of difficulties. When his bishop almost got trapped, he decided to give a pawn hoping to create some counterplay. His opponent kept play good moves though and Gerent didn’t manage to get back into the game. So after 3.5 hours, Gerent had to throw in the towel.

Time for lunch break and time to do some patching up. After the break the kids took some rest to prepare for the next round.

Round 3 Everybody managed to bounce back from the tough second round to play some good chess again. This time the first game finished only after 1.5 hour. Marcus scored another win, although his opponent could have tricked him right before the end. A good reminder to remain focus until the game is completely finished. Boris got into another double rook endgame in the third round. This time a couple of pawns up. Having learned from the previous round, he didn’t allow his opponent to get active with the rooks.

Gerent also came out smiling. He quickly achieved an attacking position in the French exchange variation and from there he just steamrolled his opponent. A very convincing win and a good way to recover from a loss. The other good news was that he had seen that Gabriel is also winning.

When Gabriel finally came out of the playing hall he was smiling. Even though he had to wait for a long time to finish, as his opponent used his remaining 30 minutes for his last move, he hadn’t let it affect his mood. In the game Gabriel had punished his opponent for his lack of development. He kept the enemy king stuck in the centre and kept increasing the threats until it became too much for his opponent.

James managed to play a marathon-game. His Catalan was not a big success and he quickly found himself with his back against the ropes. James managed to stay on his legs and dodge all the decisive blows. When he noticed his opponent get tired, he tried to land some small punches himself. This was enough to scare him off and the worn out fighters settled for a draw (despite James’ position being clearly worse). A lucky break on our part!

Another tough day, just before the rest day. Round 4 was scheduled for the morning and in the afternoon the kids could test their blitz skills in a 9 round tournament.

The most important game of this day was the direct encounter between friends and classmates Gabriel and Marcus. With both still having perfect score, this was bound to happen. After 1.5 hour Gabriel was still one 100%. Marcus erred after the opening and Gabriel gladly accepted the gift

Next to finish was Boris. Again he managed to get into a double rook endgame. This time he quickly traded off one rook to eliminate any form of counterplay. After this the rest was easy. With 3 out of 4 he is climbing his way back to the top spots.

Gerent also scored his second consecutive win. Outplaying his opponent in the middlegame, he managed to get his passed pawn to the second rank. Right when it was time to cash in the point, Gerent made a terrible mistake. Luckily the opportunity went by his opponent unnoticed. A few moves later Gerent still collected the full point.

James played another long game. Approaching the position too passively, he let his opponent take control. Slowly his opponent managed to increase his advantage. James started to create some threats at the risk of getting checkmated. As his opponent didn’t respond accurately, James seized the initiative and went straight for the throat. His attack was successful and James narrowly escaped again, taking the lead in the tournament.

The blitz tournament was a bit messy. With all players in one big group, it was a challenge for everybody. The kids were mostly kept inside the playing hall to avoid delay between the rounds. This allowed for some parents to take some well-deserved break. Some went to the gym for a run, while others went outside to get some Taiwanese milk bubble tea.

James playing on a live board, broadcasted on YouTube and in the waiting room

All in all the tournament went well for our students, despite a slow start for some. James even managed to reach the live board where he had chances to draw an American FM. In the end he scored a respectable 7 points to finish first in the U15 category and 5th overall. Other results: Gerent (5.5 pts, 5th U15), Boris (5 pts, 4th U11), Gabriel (4.5 pts, 6th U9) and Marcus (4 pts, 9th U9).

After this long day and with a bunch of extra family members arriving, a group went to the night market to unwind some. With the rest day coming up, the kids were allowed to sleep a little bit later.

Adversaries in the morning, Spidermen at night!

For the rest day a whole day of sightseeing was planned by the Su family. Some rain in the morning made us delay our plans a bit, but gave the kids some opportunity to practice and prepare a little.

Time for preparation and practice!

Around 11am the group (16 people!) set off for the Dragon and Tiger pagodas. It was still raining, but that didn’t ruin our moods. The view was great and the kids were finally able to enjoy some fresh air.

We won’t let a bit of rain ruin our day!

After the pagodas we went to the Pier for some lunch. The kids quickly seized this opportunity to play all sorts of card games. With everybody well fed and happy again it was time for the second part of the day. Some went back to the hotel for a rest, Boris and his dad went to see the finals some International Basketball tournament, while the rest took the ferry to Citing Island for some sightseeing. Here we rented some electric bikes/carts to drive around the island. The kids were happy to drive us around, so us adults could relax and enjoy the scenery.

James driving the team around

We all met up again for dinner, which included some great Peking Duck. After dinner everybody went back to the hotel again for some last preparation or an early sleep. With five rounds in the coming three days, this will be most important part of the tournament! 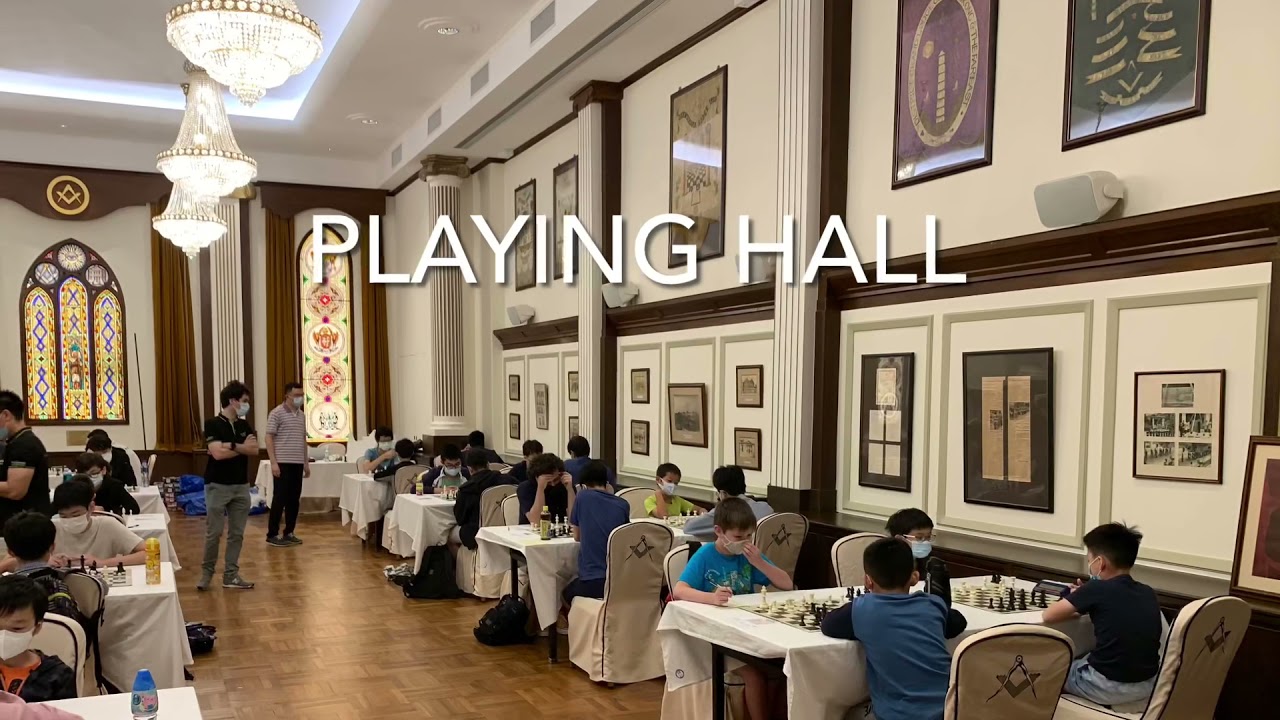 Interview with the Summer Camp Coaches under COVID-19 Circumstances

Interview with the Summer Camp Coaches under COVID-19 Circumstances